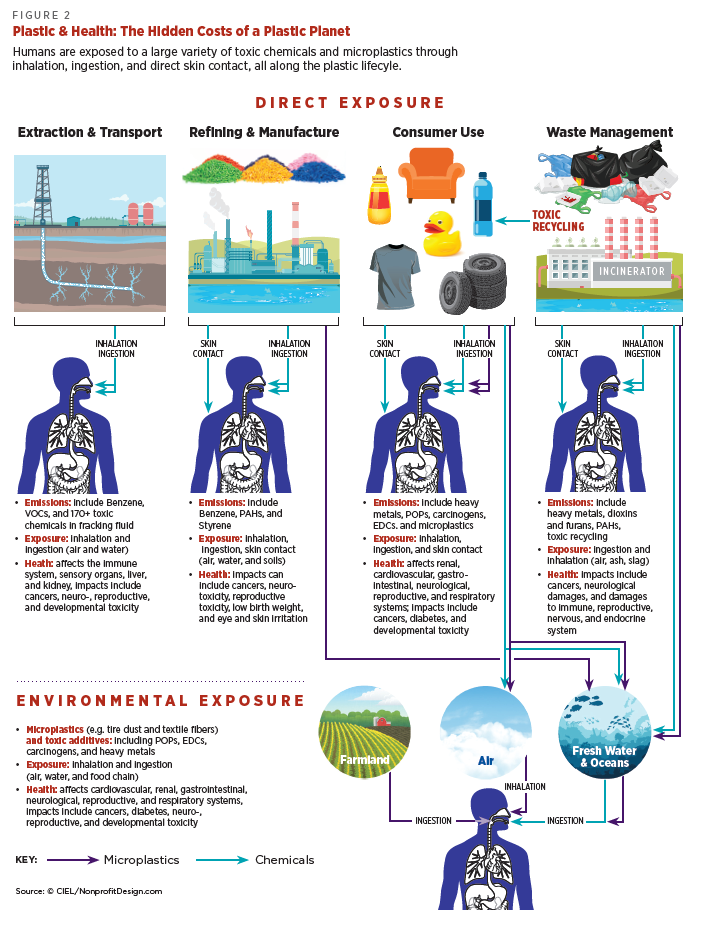 At every stage of its lifecycle, plastic poses distinct risks to human health, arising from both exposure to plastic particles themselves and associated chemicals. The majority of people worldwide are exposed at multiple stages of this lifecycle.

99% of plastic comes from fossil fuels. The extraction of oil and gas, particularly hydraulic fracturing for natural gas, releases an array of toxic substances into the air and water, often in significant volumes. Over 170 fracking chemicals that are used to produce the main feedstocks for plastic have known human health impacts, including cancer, neurological, reproductive, and developmental toxicity, impairment of the immune system, and more. These toxins have direct and documented impacts on skin, eyes, and other sensory organs, the respiratory, nervous, and gastrointestinal systems, liver, and brain.

Transforming fossil fuel into plastic resins and additives releases carcinogenic and other highly toxic substances into the air. Documented effects of exposure to these substances include impairment of the nervous system, reproductive and developmental problems, cancer, leukemia, and genetic impacts like low birth weight. Industry workers and communities neighboring refining facilities are at greatest risk and face both chronic and acute exposures during uncontrolled releases and emergencies.

Use of plastic products leads to ingestion and/or inhalation of large amounts of both microplastic particles and hundreds of toxic substances with known or suspected carcinogenic, developmental, or endocrine-disrupting impacts.

All plastic waste management technologies (including incineration, co-incineration, gasification, and pyrolysis) result in the release of toxic metals, such as lead and mercury, organic substances (dioxins and furans), acid gases, and other toxic substances to the air, water, and soils. All such technologies lead to direct and indirect exposure to toxic substances for workers and nearby communities, including through inhalation of contaminated air, direct contact with contaminated soil or water, and ingestion of foods that were grown in an environment polluted with these substances. Toxins from emissions, fly ash, and slag in a burn pile can travel long distances and deposit in soil and water, eventually entering human bodies after being accumulated in the tissues of plants and animals.

Plastic in the Environment

Once plastic reaches the environment in the form of macro- or microplastics, it contaminates and accumulates in food chains through agricultural soils, terrestrial and aquatic food chains, and the water supply. This environmental plastic can easily leach toxic additives or concentrate toxins already in the environment, making them bioavailable again for direct or indirect human exposure. As plastic particles degrade, new surface areas are exposed, allowing continued leaching of additives from the core to the surface of the particle in the environment and the human body. Microplastics entering the human body via direct exposures through ingestion or inhalation can lead to an array of health impacts, including inflammation, genotoxicity, oxidative stress, apoptosis, and necrosis, which are linked to an array of negative health outcomes including cancer, cardiovascular diseases, inflammatory bowel disease, diabetes, rheumatoid arthritis, chronic inflammation, auto-immune conditions, neuro-degenerative diseases, and stroke.